On 11 November 2016 there was a commemoration event by the memorial plaque in front of Comenius University’s historical building in honour of the Bratislava students’ march of 16 November 1989.

This event saw the Comenius University leadership as well as representatives of the Nation’s Memory Institute, the Staré Mesto (Old Town) city borough, and university students all participate.

“I am extremely proud of the fact that it was students of our university who, alongside their fellow students in Prague, triggered the fall of the communist regime. Thanks to them, history was made here in our auditorium on Šafárik Square which beckoned in a new and more just era,” said Comenius University Vice-Rector, Associate Professor Vincent Múcska, in his address.

Dr Ondrej Krajňák, Chair of the Board of Directors of the Nation’s Memory Institute, addressed the gathering, saying that, “A student’s soul is honest and sensitive to every injustice. In the past, students were a sort of barometer of the degree to which things could be tolerated, and to what time society would be willing to endure and accept the transgressions of (now former) politicians who do not think democratically.”

The Old Town borough mayor, Radoslav Števčík, who himself was a participant and one of the initiators of the protests by students from Comenius University’s Faculty of Arts, said, “Even though not everything since 1989 has turned out in the way that we or our parents had imagined, the important thing is that developments in subsequent years up until now have been in our hands.”

Adam Sarlós from the Faculty of Arts spoke on behalf of Comenius University’s current students and appealed for society to hear the students’ voice now as well.

This commemoration of the Bratislava students’ march and the Velvet Revolution is a part of The 2016 Freedom Festival, which runs from 8 to 20 November 2016. 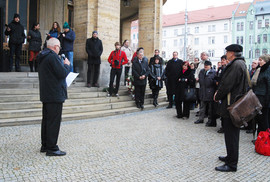 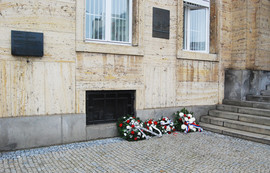