Bratislava, 25 September 2017: Today the ceremonial opening of the new academic year took place at Comenius University in Bratislava. This is the ninety-ninth academic year to have commenced at Slovakia’s oldest and largest university.

“Educating and spreading knowledge in union with science and creative work to our students as well as to the wider public is the mission of every good university. As Slovakia’s ‘national’ university, we carry the great university share of responsibility for all of Slovak society and its future as well as its place in our European family and indeed in the world in a greater context. We have become leaders in various areas of endeavour: be it in having the largest share of scholarly publications and elite research teams out of all of Slovakia’s universities or being able to provide the greatest opportunities for international experiences to our own students as well as international students studying here,” said Comenius University Rector, Professor Karol Mičieta, in his introduction.

Speaking in the Comenius University Auditorium, the rector did not shy away from criticizing the current state of affairs in the education sector: “The state of education, including tertiary education, is unsatisfactory and demands changes. But changes that are real and qualified by a proper analysis! This is why our academic community submitted some fundamental objections to the Learning Slovakia document and has a position of strong disagreement to the proposed amendments to the Universities Act and the proposed Provision of Quality in Higher Education Act. We have also expressed disagreement with the handling of European structural funds for science and research. We are confident that the deficiencies which we have pointed out will be resolved and that the proposed solutions will be accepted in the interests of this issue.”

“While there are still enrolments underway, we are more or less in the same position as last year. As of today, we have 20,600 enrolled students and 24,200 students in total if you include doctoral students. Among them there are 7200 first-year students and over 2000 international students. However, overall there is a trend for there being fewer students each year due to the current demographic transition. For instance, in 2014 more than 24,000 students studied at our university, making that a drop in numbers of nearly 4000 students. However, the number of enrolled international students so far this year is more than 2500, which is a significant increase compared to last year. Our university offers students a total of more than 700 study programmes, with a number of them being taught in foreign languages,” the rector said.

The rector also noted that Comenius University is in the top two percent of universities in the world, which has been reflected in its consistent placings in international rankings. “I would like to point out that the current levels of state subsidies cover around fifty percent of our running costs and that the other fifty percent is acquired by our own means from various sources. It is important to point out that we are often compared with partner universities which have significantly greater budgets than us: just for comparison, the University of Vienna has a state subsidy almost ten times greater than what we have. Our current placings show that in spite of underfunding, our scientific activity and quality of teaching is comparable to that which is being offered at quality institutions abroad,” the rector said.

The ceremonial opening of the academic year was attended by the Minister of Education, Science, Research and Sport of the Slovak Republic, Dr Martina Lubyová: “The number ninety-nine and the ninety-ninth academic year. This is very nice. I also have a very interesting number. I am the twentieth minister of education, science, research and sport in Slovakia since 1989. Considering the moderate amount of time that ministers in education stay in their position, I firmly believe and indeed hope that I will be able to take part in the opening of your one hundredth academic year in twelve months’ time,” the minister said with a smile. “Your university is beginning the new academic year with a rich tradition behind it. It has already given Slovakia 200,000 highly talented people, experts who the country’s future is reliant upon. Your role in this area is irreplaceable. I am aware of the fact that, as representatives of the ministry of education and members of the central state administration, we have to help you in creating suitable conditions and offer you support,” the minister said.


Tuition in the winter semester of the new academic year at Comenius University will continue until 22 December 2017. Then from 2 January through to 16 February 2018 the exam period will take place. Tuition in the summer semester commences on 19 February and continues until 18 May 2018. From 21 May to 30 June 2018 the summer exam period will take place.

More photographs can be found on Comenius University’s Facebook page. 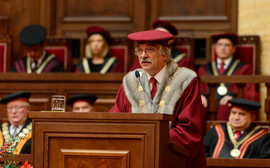 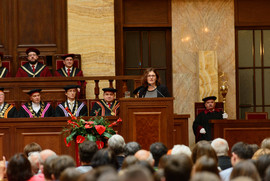 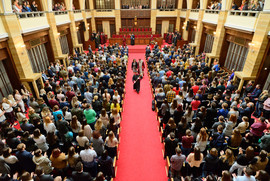